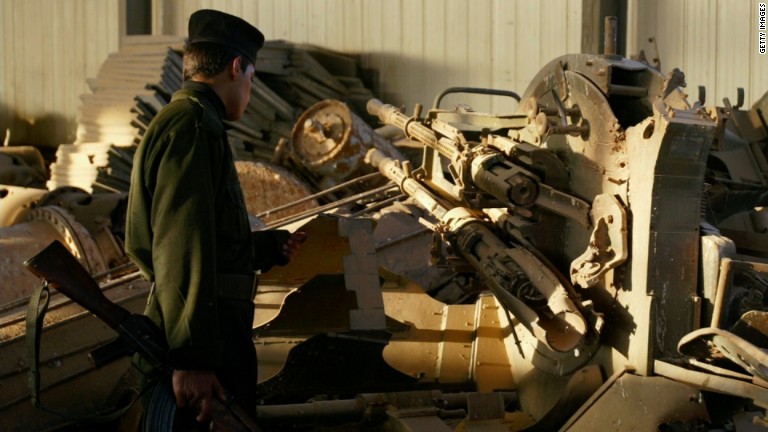 At the end of the 1990-1991 Persian Gulf War, the United Nations passed Security Council Resolution 687 setting the terms for the ceasefire between Iraq and the US-led coalition. Section C of the resolution called for the elimination of Iraq’s weapons of mass destruction and some ballistic missiles and established the United Nations Special Commission (UNSCOM).

April 18, 1991 – Under the terms of SCR 687, Iraq gives a detailed account of its weapons inventory and denies it has a biological weapons program.

June 17, 1991 – The UN Security Council passes SCR 699, which reaffirms the authority of UNSCOM and the IAEA to conduct inspections in Iraq.

September 6, 1991 – Iraq blocks the use of helicopters by UNSCOM teams.

October 11, 1991 – The United Nations passes SCR 715. It outlines the plans for ongoing monitoring and verification in Iraq. In response, Iraq says that SCR 715 is unlawful and that it’s not ready to comply.

March 19, 1992 – Iraq declares that it once possessed 89 missiles and chemical weapons, but destroyed them in the summer of 1991. This unilateral destruction of weapons is a violation of SCR 687.

July 6-29, 1992 – Inspectors are prevented from searching the Ministry of Agriculture by Iraqi officials.

October 15, 1994 – SCR 949 passes. The resolution demands that Iraq begin cooperating with UNSCOM and withdraw troops from the Kuwait border.

July 1, 1995 – Iraq admits to the existence of its biological weapons program.

December 16, 1995 – UNSCOM has the Tigris River near Baghdad searched. They uncover over 200 missile parts, believed to have originated in Russia.

May 1996 – Al-Hakam, a facility used to produce biological weapons agents, is destroyed.

September 25, 1997 – During an inspection of a food laboratory, inspectors seize suspicious documents concerning bacteria and chemicals. The documents originated from the Iraqi Special Security Office. UNSCOM is prevented from inspecting SSO’s headquarters.

August 5, 1998 – Iraq decides to suspend cooperation with UNSCOM until its demands for an end to the embargo and a reorganization of UNSCOM are met.

September 16, 2002 – Iraq agrees unconditionally to the return of inspectors.

September 19, 2002 – Iraqi Foreign Minister Naji Sabri delivers a letter to the United Nations from Hussein stating that Iraq has no chemical, nuclear or biological weapons.

October 1, 2002 – The UN and Iraq agree on terms they say are consistent with existing UN resolutions. The United States threatens to veto unless a US resolution is approved that would allow military action for non-compliance by Iraq.

January 20, 2003 – After two days of negotiation, Hans Blix, Mohamed ElBaradei and Iraqi officials reach an agreement about Iraqi cooperation and concessions regarding the inspections.

February 5, 2003 – US Secretary of State Colin Powell briefs the UN Security Council on inspections. He presents evidence that the United States says proves Iraq has misled inspectors and hidden proscribed weapons and equipment.

February 14, 2003 – Blix and ElBaradei brief the UN Security Council. Blix reports that the inspectors have not yet found any weapons of mass destruction in Iraq. Blix also reports that Iraq is in violation of UN resolutions concerning its Al Samoud 2 missile program.

February 27, 2003 – Iraq agrees to destroy the country’s Al Samoud 2 missile stock. However, the letter doesn’t specify a date that the missile destruction will begin.

March 19, 2003 – Bush announces US and coalition forces have begun military action against Iraq.

October 2, 2003 – David Kay, who heads the US search for weapons of mass destruction, reports to congressional intelligence committees that the Iraq Survey Group has found no such weapons in Iraq. Kay says he will need six to nine months to conclude his work.

January 28, 2004 – After retiring earlier in the month, Kay tells the Senate Armed Services Committee that there should be an independent investigation into the flawed intelligence about Hussein’s weapons capability.

September 30, 2004 – The Iraq Survey Group report is released. The report concludes that Hussein did not possess weapons of mass destruction.

March 31, 2005 – The Commission on the Intelligence Capabilities of the United States Regarding Weapons of Mass Destruction reports that the intelligence community was “dead wrong” in its assessments of Iraq’s weapons of mass destruction capabilities before the US invasion.

December 2005 – US inspectors end their search for weapons of mass destruction.