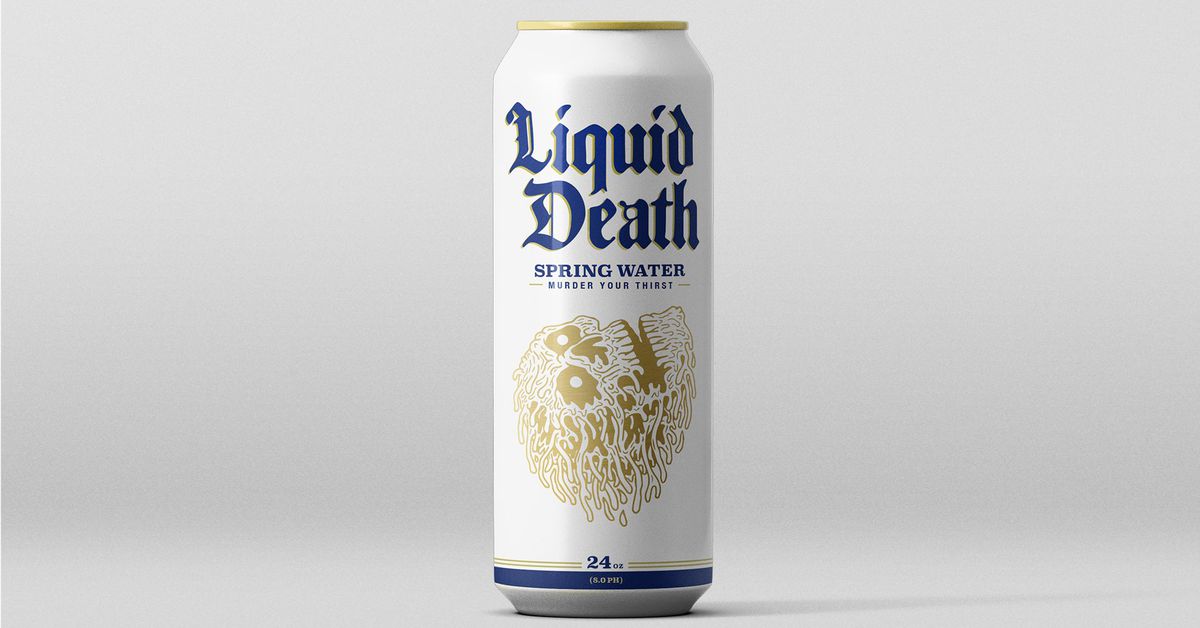 When Liquid Death launched in 2017 — with just a rendering of its now-distinctive tall boy can hitting the internet — everyone was pretty sure that this new water brand was just a gimmick. Some called it the “Ed Hardy of water,” recalling the worst fashion trend of the early ’00s. Others decried the water’s heavy metal branding and slogan — “murder your thirst” — as toxic masculinity run rampant. Mostly, though, people just thought that the brand was a highly targeted stunt intended to sell expensive water to punk kids, skateboarders, and anyone else dumb enough to pay a premium just because it comes in a tall boy can emblazoned with a skull.

But it turns out that Liquid Death — and this is coming from someone who insufferably considers themselves a water snob — is pretty damn good. When I first tried it, I was a little worried that the aluminum can would impart a tinny flavor, like those stainless-steel water bottles, but the water inside was surprisingly neutral with a mild minerality to keep things interesting. The can also makes the water feel colder, a perception that’s apparently backed by science, making it taste more refreshing than the water that flows out of my Brita pitcher. That was especially true when I reached for a chilly can in the midst of a brutal hangover last week, which was also when I learned that it is surprisingly easy to chug an entire can in a matter of seconds.

Liquid Death captured the imagination of the internet immediately. Within a couple of months of its launch, the brand had racked up more than 100,000 fans on Facebook, which at the time was a number that eclipsed bigger brands, like Aquafina, on the platform. A teaser video made with mock-ups of the cans netted more than 3 million views before anyone had ever tasted a single drop: That’s when co-founder Mike Cessario says he realized that he’d created something special. Before launching Liquid Death, Cessario was a graphic designer by trade, working at advertising agencies and producing projects for big companies like Netflix. Even though a lot of the early commentary about Liquid Death was negative, Cessario knew that you just couldn’t buy this kind of buzz.

“When I was working with these huge corporate brands, they would do all kinds of testing and focus groups, but I never felt like those were really accurate,” Cessario says. “Seeing how people in the market are actually reacting to it on social media is a much better barometer for figuring out whether or not we had an idea that would actually work.”

Liquid Death — a collaboration between Cessario, partner J.R. Riggins, bartender Pat Cook, and artist Will Carsola — was conceived as a different way to hydrate partiers. “A lot of the brands that are in the alternative space are really unhealthy,” Cessario says. “It’s a lot of cheap gross beer and energy drinks that most people don’t want to drink. We wanted to give people permission to participate in this cool rock-and-roll brand without needing to consume something gross.” And water in a can gave the brand the unique opportunity to appeal to the party crowd: The tall boy beer can look is a natural fit for a festival, house party, or bar.

The idea of water in a can isn’t totally foreign: It’s often purchased by doomsday preppers who tout its extended shelf life and ease of stacking, and is frequently distributed by disaster relief organizations in times of crisis. But Liquid Death’s genius lies in bringing together the can — which feels so much like holding a beer — and the edgy branding. The team first approached naming the product like a craft beer, for obvious reasons. A lot of names were left on the cutting room floor, including the hilariously dorky “Southern Thunder,” before settling on Liquid Death.

Cessario takes issue with the notion that Liquid Death is simply a gimmick. In his mind, pretty much everything is a gimmick. He points to energy drink brand Red Bull, which has expanded well beyond the beverage world into extreme sports like dirt biking or car racing with incredible success. Liquid Death is attempting to replicate that in its own way. “Red Bull is a gimmick. All it is is soda. It’s the same thing that’s been around forever, but they created this brand around action sports,” Cessario says. “What does riding a dirt bike have to do with an energy drink? These guys are professional athletes, they don’t even drink that stuff. But they do drink water.”

Once they’d chosen a name, the company set out to produce its canned water, even though no one involved had ever brought a new beverage to the market. They found an Austrian supplier, who used mountain water bubbling up from a nearby spring to produce energy drinks and other beverages, by literally searching on Google. As luck would have it, the company was also able to can the water that would eventually become Liquid Death, instead of putting it into plastic bottles.

That was especially important to Cessario and his partners, who made “death to plastic” the company’s motto. According to the company, its aluminum cans are “infinitely recyclable.” “Plastic is not even technically recyclable anymore because it is no longer profitable to recycle,” reads Liquid Death’s website. “Environmental economists now say it is actually better for the planet to simply throw your plastic in the trash so that it requires less trucking to get it to the landfill. Sad stuff.”

It may seem counterintuitive, but Cessario says that it is, somehow, more sustainable for Liquid Death to ship in water from the Alps than source it from a spring in the States. “Ocean freight is far and away the most carbon-efficient form of transportation by the pound, because one giant ship can move an insane amount of cargo,” he says. “You would need something like 500 trucks to move that same amount of freight.” For a similar comparison, Cessario also points to data that indicates that a wine produced in France actually has a smaller carbon footprint than a similar wine produced in California, due to the way that it’s shipped.

When the water officially launched in 2019, Liquid Death immediately found a devoted audience that ranged from straight-edge hardcore kids who party without booze to artists and skateboarders. Its first distributors were bars, tattoo parlors, and liquor stores. Liquid Death partnered with concert promoter Live Nation, which made the brand the official water of major music festivals like Governors Ball and Austin City Limits. In 2020, the company collaborated with members of bands like Alkaline Trio, Anti-Flag, and Rise Against to make a full-length punk album inspired by comments left by Liquid Death “haters,” complete with tracks with titles like “Rather Murder Myself” and “Liquid Lame-O.” In collaboration with Tony Hawk, the brand sold skateboard decks printed with the legendary skater’s actual blood to raise money for charity. Skate kids and punks had a brand that was catering to them, that made them feel seen, so much so that more than 120 Liquid Death enthusiasts have actually had the brand’s logo tattooed on their bodies.

“We know that certain folks aren’t going to take a whole lot of convincing. They’re just going to see the can, think it’s awesome, and pick it up,” Cessario says. “Once you build that core audience, you’re giving people who aren’t part of that culture, like a soccer mom for example, permission to participate in this cool, rock-and-roll brand.”

But because Liquid Death is both visually compelling and refreshing, soccer moms are the ones buying it. Just before the pandemic began in March 2020, Liquid Death launched in Whole Foods stores across the country, priced at $14.99 for a 12-pack, and immediately became the fastest-selling water brand on its shelves. Shortly after that, the brand introduced a sparkling water with a carbonation level intended to mimic that of beer, and expanded into more retail outlets. Now, the water is also sold at Sprouts Farmers Market, and recently launched in every 7-Eleven in the United States and Canada, along with Sam’s Club.

Cessario wasn’t willing to divulge any specifics on sales or how many cases of Liquid Death the company is shipping every month, but he says that revenue has grown by an average of 300 percent every year since launch. As of last year, the brand had raised more than $34 million in funding from major investors like California VC firm Science, Toms shoes co-founder Blake Mycoskie, and the original #Girlboss, Sophia Amoruso.

And the company says that it’s just getting started. Cessario says Liquid Death hasn’t experienced the same supply chain issues faced by bottled water producers, which means that they’ve spent the past several months ensuring that there’s “more inventory than we could ever need.” With that, the company hopes that it can snake away some of the market share from companies who are struggling to keep their products on the shelves.

In the future, expect to see Liquid Death in even more retailers, and possibly a broader range of products. The company is still kicking around ideas, perhaps flavored waters or a different beverage altogether, but fans can always expect Liquid Death to stay true to its roots. “The most important thing for us is to stick to our company ethos, which is all about health,” Cessario says. “We’re not going to make some energy drink full of sugar just because our audience might like it.”

As Liquid Death becomes more ubiquitous, don’t be surprised if canned water ends up creating a lot of converts. There’s no denying that it tastes good, and there is something distinctly appealing about the Liquid Death can. It’s satisfying to hold — it dents in just the right spot for your thumb to grab it — and does, sometimes annoyingly, inspire strangers to ask you just what the hell you’re drinking. In some ways, the brand’s success almost hinges on its ability to make people say “WTF.”

“If you’re walking around a bar with a Liquid Death and you bump into a stranger, it’s going to start a conversation,” Cessario says. “There’s really no other water that can do that.”