When ‘The Wolf of All Streets’ podcast host Scott Melker first came into Bitcoin, it was not because he saw BTC as a store of value.

“I came to trade and make money,” he said. “Very frankly, I was in it for the dollars. It was this mythical world of unicorns, 100x trades and this crazy sort of casino.”

Looking Forward to Meeting You at iFX EXPO Dubai May 2021 – Making It Happen!

“It took me a while after getting into it as a trader to realize what I was actually trading, and the importance of it,” he said. “I think that’s really important for new people: to actually dig in and understand what you’re buying, and not do what most of us did…which is just to speculate because you think the price will go up.”

Nowadays, Scott is something of a Bitcoin evangelist. Scott believes that BTC plays an important role in the global economy, and he is not alone.

“I believe that people are starting to realize [the importance of Bitcoin] on a mass scale since COVID hit, and we had the global economic meltdown. We saw stocks continue to go up while people on main street suffered,” Scott said. As a result, “people are realizing what Bitcoiners have realized for a very long time, which is that it’s impossible to store value in legacy systems.”

In other words, “you can’t save dollars. Dollars are for spending,” he explained. “Hard assets like Bitcoin are for saving. If you [keep your savings in] dollars, you lose up to 15 percent of your buying power every single year.”

“I think people are starting to realize that you can’t print money forever, that infinite quantitative easing is not sustainable, and that they need other options to protect their wealth.”

This is an excerpt that has been edited for clarity and length. To hear Finance Magnates’ full interview with Scott Melker, visit us on Soundcloud or Youtube.

Bitcoin is one such option. And, while its day-to-day price volatility can be alarming (or perhaps exciting) to new buyers, “it’s important to understand the underlying value of the asset, and why you should be holding it for a really long time, and not concerning yourself with what’s happening with the price.”

For example, earlier this month, the price of BTC suddenly took a 30 percent dive. This may have caused new investors to ‘panic sell’ their assets. However, seasoned traders and investors see the price cut as an opportunity to buy more Bitcoin at a ‘discount’.

But, what caused the haircut? For Scott, the answer comes down to one word: “leverage.”

“I don’t think it’s a grand conspiracy theory. It’s the same on the way up,” he added. “You see euphoric news and headlines; on the way down, everybody piles on and tries to ‘kick the dead horse’, so to speak.”

In other words, news cycles may have played a role: specifically, China’s reported plan to crack down on crypto, and Tesla’s announcement that it would no longer be accepting BTC payments. However, ultimately, Scott believes that leverage was the largest factor at play in Bitcoin markets in May.

“So, that just tells you that this is a nascent market. There are huge players who have the ability to very easily move price once they start to trigger that leveraged liquidation cascade. That’s what you see in this market. That’s the reason that we have many more dramatic moves when it goes down.” 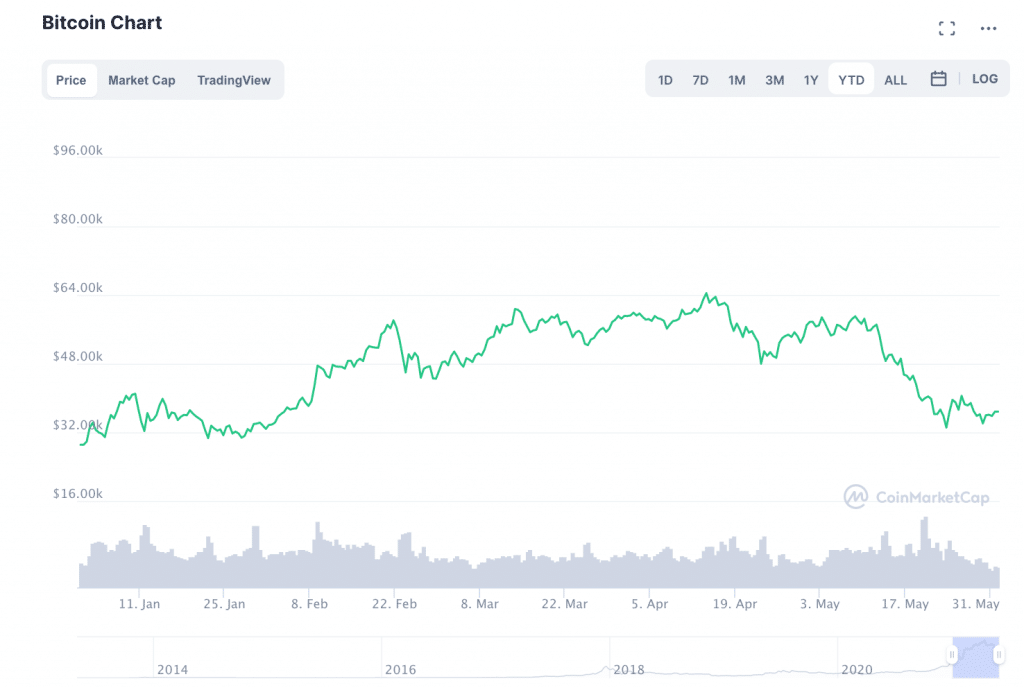 What Role Does Negative News Play in BTC Prices?

As for the other news, Scott believes that there was not much that was really “new” about it: “China has ‘banned’ Bitcoin more times than I can remember, and I’ve only been here for five years,” he said. “Literally every time BTC is dropping, there’s some sort of ‘China ban’ reported, even if it’s something that was already stated six months or a year ago.”

“As for Tesla, the story there has always been that they invested in Bitcoin as a treasury asset. That has not changed,” Scott said. Essentially, “Elon Musk openly tweeted that Tesla has ‘diamond hands’. They have not sold their Bitcoin except for that small fraction to pad their quarterly earnings, which made perfect sense.”

“The narrative that Tesla was going to accept BTC payments for cars was a very small piece of the puzzle that was overblown when it was reversed. There might be seven people on the planet dumb enough to sell a deflationary asset [like Bitcoin] to buy a car that loses 30 percent of its value the minute you drive it off the lot.”

“To add to that, if you’re in the United States and you pay for a car with Bitcoin, you’ve then [technically] sold your Bitcoin, and then have a taxable capital gain that makes the car up to 37 percent more expensive as well.”

Therefore, Scott believes that Tesla’s decision to accept BTC payments in the first place was most likely “a symbolic gesture.”

“It’s my opinion that Elon Musk was probably pressured by the Environmental Protection Agency (EPA) or another government organization since his primary business right now isn’t really selling cars. It’s selling energy credits.” Therefore, “anything that would be optically poor in terms of Tesla being an innovator in clean technology and removal and fossil fuels” is a matter of concern for the company.

Social Media Influencers Play a Big Role in Capital Markets–but “They’re Just Discovering It and Learning alongside Everyone Else.”

Still, Elon Musk (and his tweets) have an outsized effect on cryptocurrency markets. And, Musk is not the only one. More than ever, social media celebrities have an influence on trading behaviour in capital markets in crypto and beyond.

Why is this happening? “It’s the nature of social media and the way that the world is moving,” Scott said. “Compound that with COVID the Dave Portnoys of the world and people being bored at home with stimulus money and no sports to bet on, and you get a lot of interest in markets.” As a result, “inevitably, you get a lot of gamblers.”

“I don’t think most people who are doing it mean harm,” Scott said. “They’re just discovering it and learning alongside everyone else.”

This is an excerpt that has been edited for clarity and length. To hear Finance Magnates’ full interview with Scott Melker, visit us on Soundcloud or Youtube.