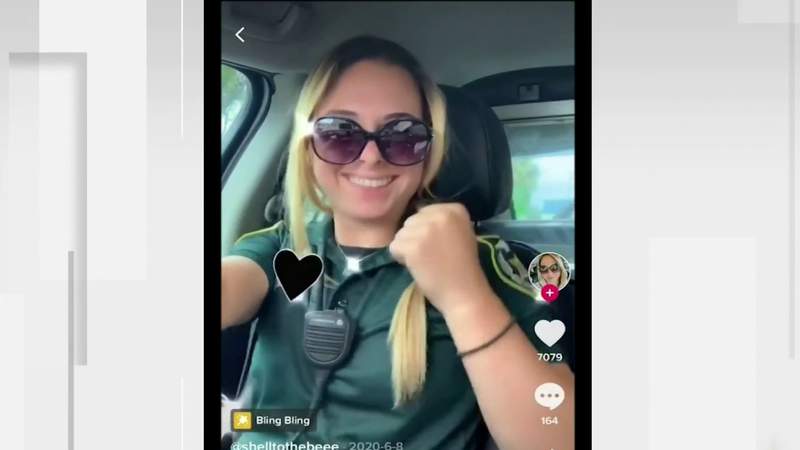 ORANGE COUNTY, Fla. – An Orange County deputy received a three-week suspension after an internal sheriff’s office investigation concluded that she posted videos on the social media platform TikTok that showed her dancing to explicit music while dressed in her uniform, News 6 has learned.

Following her suspension, Abramson has continued to create new videos on the social media platform.

Abramson told sheriff’s investigators the motive of her TikTok videos was “the humanizing (of) the badge… that we are not just this bad guy behind a gun,” according to a report.

Orange County Sheriff’s Office policy prohibits employees from engaging in social media activity that could “negatively affect the public perception of the agency.” It notes that speech made pursuant to employees’ official duties is not protected under the First Amendment to the U.S. Constitution.

Abramson, who currently serves as a school resource officer, began creating TikTok videos a few months after she was hired by the sheriff’s office in November 2019. Her account has more than 80,000 followers.

In December 2020, a fellow school resource officer discovered Abramson was live streaming a video on the social media platform while in a marked Orange County Sheriff’s Office patrol vehicle and wearing a uniform, according to a report.

A supervisor immediately called Abramson and advised her to stop live streaming on TikTok while she was on duty.

“I’m glad I can entertain you. I’ll keep dancing for all you Karens,” Abramson allegedly replied, suggesting the commenter was being unusually demanding.

Abramson later deleted a copy of that video and the associated comments at the request of her supervisor, the report states.

After verbally counseling Abramson, a supervisor sent her an email.

“I understand the intent may not be malicious, but perception is reality,” the unidentified sergeant wrote. “Please do not let social media be a distraction while on duty, which could jeopardize your safety and the safety of others.”

The supervisor also instructed Abramson to “refrain from posting anything that would shed a negative light on your character and the Sheriff’s Office,” according to the email.

Less than three weeks after receiving that email, Abramson posted another TikTok video that showed her dancing to music with foul language while in uniform.

The song, “Me Too” by Kevin Gates, contains sexually explicit lyrics.

“It says the F word twice,” Abramson later acknowledged to investigators while describing the portion of the song she included in her video.

When TikTok users record a video, the audio of the music is audible so they can dance or lip sync to it, sheriff’s investigators noted.

The video appears to have been recorded in an office or school. The specific location is redacted from a public copy of the investigative report because it contains exempt information about a school resource officer.

“Now looking back, I posted it and I shouldn’t have because of the lyrics,” Abramson later told investigators, saying the video was a “trend” that other TikTok users were doing.

When reminded about the email and counseling she had received from her supervisor three weeks prior, Abramson claimed she interpreted the instruction to mean she should not livestream videos while on duty.

“He never told me to cease,” Abramson said to sheriff’s investigators before acknowledging that the sergeant had ordered her to refrain from posting anything that would cast a negative light on the agency.

Abramson told investigators she had previously discussed the agency’s social media policy with a lieutenant, but that lieutenant later said he did not remember speaking with the deputy.

While the internal investigation was underway, Abramson continued to post videos on TikTok.

In one, which appeared to have been recorded prior to her employment at the sheriff’s office, Abramson is seen behind vertical lines resembling jail bars while lip syncing the words “locked up, they won’t let me out.”

Another video posted during the active investigation shows Abramson and another deputy dancing in front of Epcot’s Spaceship Earth attraction. A caption on the video states that it was recorded at “an empty Disney park.”

As part of the internal probe, sheriff’s investigators spoke with multiple agency employees who had seen Abramson’s TikTok page.

Those employees described some of the videos as “offensive,” “unacceptable,” and “embarrassing to the agency,” according to the investigative report.

“Although most of the videos Deputy Abramson posted were benign, some of the audio tracks contained foul language and sexually explicit lyrics,” the investigative report concluded. “These videos provided an image to the public that placed members of the Orange County Sheriff’s Office in disrepute and do not align with the values of the organization.”

Since the internal investigation was completed in mid-April, Abramson has posted at least one new video on TikTok showing her wearing her agency uniform, but it does not appear to have been recorded while she was on duty and does not contain explicit language.

The sheriff’s office would not make Abramson available for an interview. When contacted by phone, the deputy said supervisors had instructed her to not speak with news organizations.