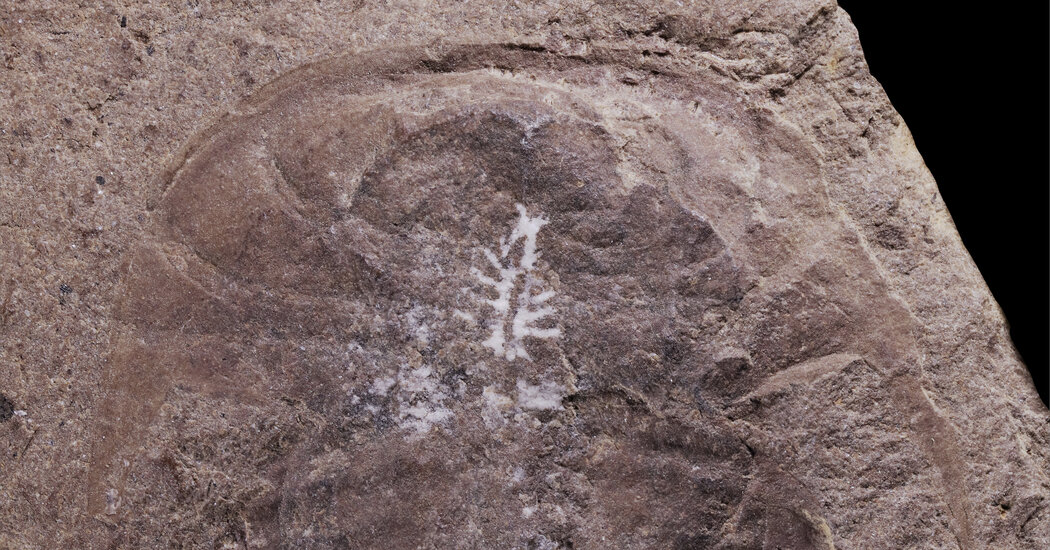 Brain tissue is innately squishy. Unlike bones, shells or teeth, it is rich in fat and rots quickly, seldom making an appearance in the fossil record.

So when Russell Bicknell, an invertebrate paleontologist at the University of New England in Australia, noticed a pop of white near the front of a fossilized horseshoe crab body where the animal’s brain would have been, he was surprised. A closer look revealed an exceptional imprint of the brain along with other bits of the creature’s nervous system.

Unearthed from the Mazon Creek deposit in northeastern Illinois, and dating back 310 million years, it’s the first fossilized horseshoe crab brain ever found. Dr. Bicknell and his colleagues reported the find last month in the journal Geology.

“These kinds of fossils are so rare that if you happen to stumble upon one, you’d generally be in shock,” he said. “We’re talking a needle-in-a-haystack level of wow.”

The find helps fill a gap in the evolution of arthropod brains and also shows how little they have changed over hundreds of millions of years.

Soft-tissue preservation requires special conditions. Scientists have found brains encased in fossilized tree resin, better known as amber, that were less than 66 million years old. They have also found brains preserved as flattened carbon films, sometimes replaced or overlaid by minerals in shale deposits that are more than 500 million years old. Such deposits include corpses of ocean-dwelling arthropods that sank to the seafloor, were rapidly buried in mud and remained shielded from immediate decay in the low-oxygen environment.

However, the fossilized brain of Euproops danae, which is kept in a collection at the Yale Peabody Museum of Natural History, required a different set of conditions to be preserved.

This arthropod was not a crab, but is closely related to spiders and scorpions. The extinct penny-size horseshoe crab was buried more than 300 million years ago in what was once a shallow, brackish marine basin. Siderite, an iron carbonate mineral, accumulated rapidly around the dead creature’s body, forming a mold. With time, as the soft tissue decayed, a white-colored clay mineral called kaolinite filled the void left by the brain. It was this white cast on a dark-gray rock that helped Dr. Bicknell spot the uniquely preserved brain impression.

“This is a completely different mode of brain preservation,” said Nicholas Strausfeld, a neuroanatomist at the University of Arizona who was among the first to report a fossilized arthropod brain in 2012 but wasn’t involved in this study. “It’s remarkable.”

The extinct Euproops brain showed a central cavity for the passage of a feeding tube and branching nerves that would connect with the animal’s eyes and legs.

Dr. Bicknell and his colleagues compared this ancient brain structure with that of Limulus polyphemus, a horseshoe crab species still found along the Atlantic coast, and noticed remarkable similarity. While the horseshoe crabs look somewhat different on the outside, the internal brain architecture hadn’t really changed despite being separated by more than 300 million years.

“It’s as if a set of motherboards has remained constant over geological time, whereas peripheral circuits have been variously modified,” Dr. Strausfeld said.

Although the E. danae fossil has been examined in the past by other researchers for its shape and dimensions, the brain, which is smaller than a rice grain, remained unnoticed. “If you’re not looking for that particular feature, then you’re not going to see it,” Dr. Bicknell said. “You develop a search image in your head.”

With the lucky discovery of this well-preserved ancient brain, the researchers hope to find more examples in other fossils from the Mazon Creek deposit.

“If there is one, there have to be more,” said Javier Ortega-Hernández, an invertebrate paleontologist at Harvard University’s Museum of Comparative Zoology and the study’s co-author.