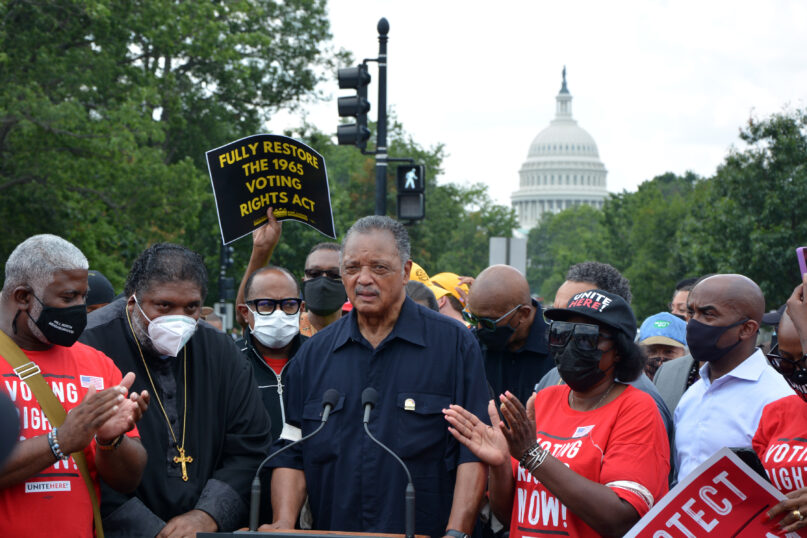 (RNS) — The Rev. Jesse Jackson and his wife Jacqueline have been hospitalized after testing positive for COVID-19, according to a statement released on Saturday (Aug 21).

“Rev. Jesse L. Jackson, Sr (79) and Mrs. Jacqueline Jackson (77) have both tested positive for the Covid-19 virus and are in Northwestern Hospital,” read the statement from the Rainbow/PUSH Coalition, referring to the Chicago medical center. “Doctors are currently monitoring the condition of both.”

According to the Associated Press, Jackson, a two-time presidential candidate and close confidante of Martin Luther King, Jr., was publicly vaccinated against COVID-19 in January. He has since called on health care leaders to bolster efforts to vaccinate African Americans.

More recently, Jackson, despite being diagnosed with Parkinson’s disease, has been a fixture at demonstrations in support of voting rights and other issues. He spoke at protests in June and early August led by the Poor People’s Campaign at the U.S. Capitol, and was arrested in both instances.

He also was arrested in July alongside the Rev. William Barber II, the Poor People’s Campaign co-chair, and about 30 others as they protested outside the Phoenix office of Arizona’s Sen. Kyrsten Sinema, demanding she end the U.S. Senate filibuster, pass voting rights legislation and raise the federal minimum wage.

Although sometimes visibly frail, Jackson delivered passionate speeches at several of the protests.

“If you call yourself a child of God, you oughta act like it sometimes,” he said while standing outside the Supreme Court in June.

He concluded the speech by leading the crowd in a call-and-response, declaring that “it’s time for us to make our case, to put our body on the line, be willing to go to jail and even die” for the cause.

A number of faith leaders and activists shared prayers after news broke of Jackson’s hospitalization on Saturday.

“Rev. Dr. Liz Theoharis, Roz Pelles, and I, along with the entire (Poor People’s Campaign) family, are praying for Rev. Jesse and Jacqueline Jackson,” Barber tweeted.

Sen. Tammy Duckworth of Illinois, Rep. Joaquin Castro of Texas and Rep. Hakeem Jeffries of New York also tweeted prayers and well-wishes for Jackson and his wife Jacqueline over the weekend, as did fellow civil rights activist the Rev. Al Sharpton.

Sharpton tweeted: “Let us all pray for Rev. and Mrs Jesse Jackson. They need our sincere and intense prayers. Prayer changes things!!!”