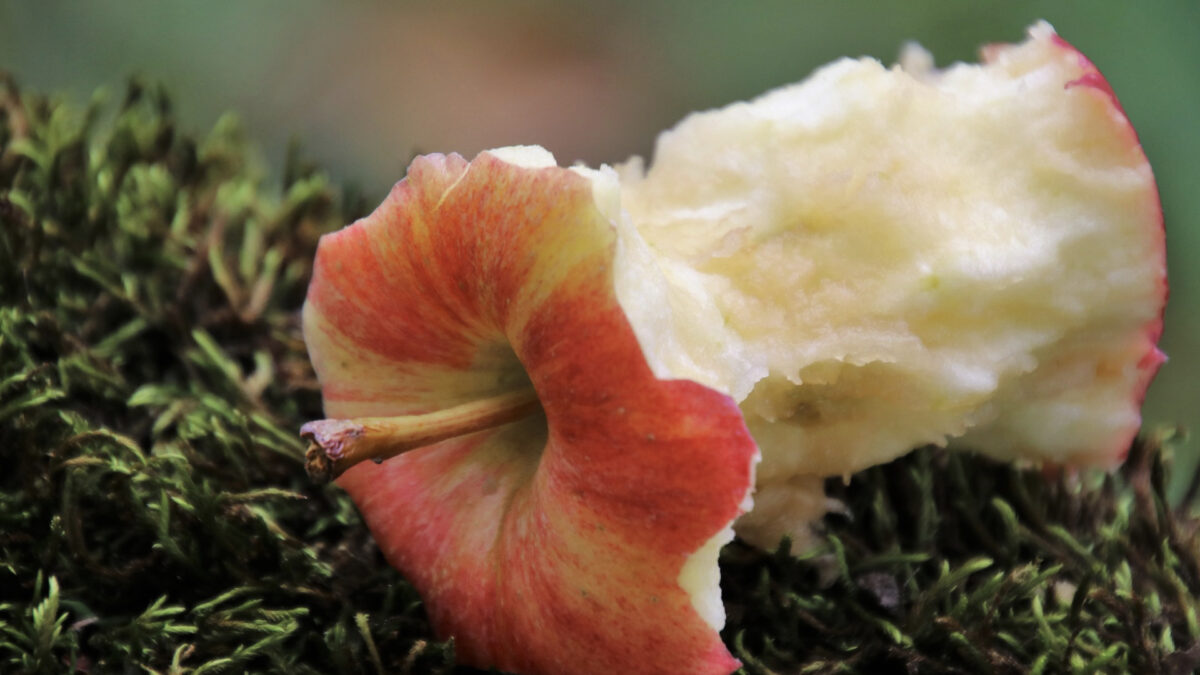 Are the health benefits associated with apple consumption simply due to other healthy behaviors among apple-eaters?

Regular apple intake is associated with all sorts of benefits, such as living longer and, more specifically, a lower risk of dying from cancer. At 0:17 in my video Apple Peels Put to the Test for Chronic Joint Pain, you can see the survival curve of elderly women. Of those who do not eat an apple a day, nearly a quarter had died after 10 years and nearly half were gone after 15 years. In comparison, those who eat on average about half an apple a day don’t die as young, and those eating one daily apple—more than three and a half daily ounces, which is around a cup of apple slices—lived even longer. Is it possible that people who eat apples every day just happen to practice other healthy behaviors, like exercising more or not smoking, and that’s why they’re living longer? The study controlled for obesity, smoking status, poverty, diseases, exercise, and more, so the researchers really could compare apples to apples (so to speak).

What they didn’t control for, however, was an otherwise more healthful diet. As you can see at 1:04 in my video, studies show that those who regularly eat apples not only have higher intakes of nutrients like fiber that are found in the fruit, but they’re also eating less added sugar and less saturated fat. In other words, they’re eating overall more healthful diets, so it’s no wonder apple-eaters live longer. But, is apple-eating just a marker for healthful eating, or is there something about the apples themselves that’s beneficial? You don’t know, until you put it to the test.

Given that “athletes use a variety of common strategies to stimulate arousal, cognition, and performance before morning training,” subjects were randomly assigned to a caffeinated energy drink, black coffee, an apple, or nothing at all in the morning. Did the apple hold its weight? Yes, it appeared to work just as well as the caffeinated beverages. The problem with these kinds of studies, though, is that they’re not blinded. Those in the apple group knew they were eating an apple, so there may have been an expectation bias—a placebo effect—that made them unconsciously give that extra bit of effort in the testing and skew the results. You can’t just stuff a whole apple into a pill.

That’s why researchers instead test specific extracted apple components, which allows them to perform a double-blind, placebo-controlled study where half the subjects get the fruit elements and the other half get a sugar pill, and you don’t know until the end who got which. The problem there, however, is that you’re no longer dealing with a whole food, removing the symphony of interactions between the thousands of phytonutrients in the whole apple.

Most of those special nutrients are concentrated in the peel, though. Instead of just dumping millions of pounds of nutrition in the trash, why couldn’t researchers just dry and powder the peels into opaque capsules to disguise them and then run blinded studies with those? Even just a “small amount could greatly increase phytochemical content and antioxidant activity…”

The meat industry got the memo. A study found that “dried apple peel powder decreases microbial expansion” in meat and protects against carcinogen production when it’s cooked. One of the carcinogens formed during the grilling of meat is a beta-carboline alkaloid—a neurotoxin that may be “a potential contributor to the development of neurological diseases including Parkinson’s disease.” Uncooked meat doesn’t have any. The neurotoxin is formed when meat is cooked, but you can cut the levels in half by first marinating it with dried apple peel powder, as you can see at 3:27 in my video.

Apple peel also cuts down on the amount of fecal contamination bacteria in meat. At 3:36 in my video, you can see a graph showing fecal bacteria growth in pork, beef, and turkey. After the addition of dried apple peel powder, the amount of fecal bacteria decreased. Apple peels can also inhibit the formation of genotoxic, DNA-damaging, heterocyclic amines (HCAs). As I show at 3:55 in my video, apple peels reduced the levels of these cooked meat carcinogens by up to more than half. “In view of the risks associated with consuming HCAs,” these cancer-causing compounds in meat, “there is a need to reduce exposure by blocking HCA formation such as by adding an ingredient during the cooking of meats to prevent their production”—an ingredient like apple peel powder. (Of course not cooking the meat to begin with be another way to reduce exposure…).

What about consuming apple peels directly? It was found that dried apple peel powder “exhibits powerful antioxidant and anti-inflammatory action,” but that was in mice. Does it have anti-inflammatory properties in people? You don’t know, until you put it to the test.

A dozen people with moderate loss of joint range of motion and associated chronic pain were given a spoonful of dried apple peels a day for 12 weeks. As you can see at 4:45 in my video, month after month, their pain scores dropped and the range of motion improved in their neck, shoulders, back, and hips. The study’s conclusion? “Consumption of DAPP [dried apple peel powder] was associated with improved joint function and…pain reduction…” Why just “associated”? There was no control group so the subjects might have simply been getting better on their own, or the placebo effect could have come into play. Regardless, why not give apple peels a try by eating more apples?

If you want to learn more about meat carcinogens, see my video Essential Tremor and Diet, and check out Reducing Cancer Risk in Meat-Eaters for more on HCAs.

Take a bite out of these apple videos:

PS: If you haven’t yet, you can subscribe to my free videos here and watch my live presentations: