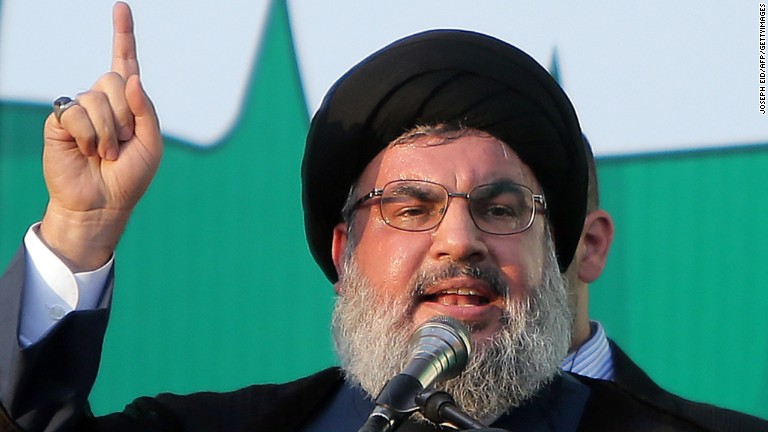 Here’s a look at the life of Hassan Nasrallah, secretary-general of Hezbollah, a Lebanese Shiite Muslim militant group.

Father: Abd al-Karim, who worked as a grocer

Wears a black turban to signify that he is a descendant of the Prophet Muhammad.

1975 – After civil war breaks out in Lebanon, the Nasrallah family leaves Beirut and moves to a village near Tyre.

1976 – Nasrallah moves to Najaf, Iraq, to attend a Shiite seminary.

1978 – Is expelled from Iraq during a time of Shiite repression (President Saddam Hussein was a Sunni) and returns to Lebanon along with his mentor, Abbas Musawi. Musawi establishes a religious school in Baalbeck, where Nasrallah teaches and studies.

1982 – Organizes a group to fight against the Israeli occupation of Lebanon. This group eventually evolves into Hezbollah.

1991 – Musawi becomes the secretary-general of Hezbollah. Nasrallah returns to Lebanon.

February 1992 – Replaces Musawi as secretary-general of Hezbollah after Musawi is killed by an Israeli helicopter strike.

1997 – Nasrallah’s son, Muhammad Hadi, is killed in a clash with Israeli forces.

July 12, 2006 – Hezbollah militants cross the border into Israel and capture two soldiers during a raid; a 34-day conflict ensues.

September 22, 2006 – Nasrallah makes his first public appearance since the beginning of the conflict in July, addressing hundreds of thousands of people at a rally in Beirut.

November 30, 2006 – In a speech broadcast on television, Nasrallah calls for peaceful protests to secure the resignation of Lebanese Prime Minister Fouad Siniora and the creation of a national unity government. The next day, security sources estimate that at least 200,000 protesters gather in the streets of Beirut.

May 2008 – Declares the government’s move to shut down Hezbollah’s communications network “a declaration of open war.” Armed conflict breaks out between Hezbollah fighters and pro-government militias.

May 21, 2008 – After five days of talks, representatives from the Hezbollah-led opposition and Lebanon’s Western-backed government reach an agreement ending the 18-month political crisis.

May 25, 2013 – In a televised speech, Nasrallah publicly acknowledges for the first time that Hezbollah fighters are in Syria battling in support of President Bashar al-Assad’s regime.

December 2017 – Joins calls for a Palestinian uprising following the United States’ recognition of Jerusalem as the capital of Israel.