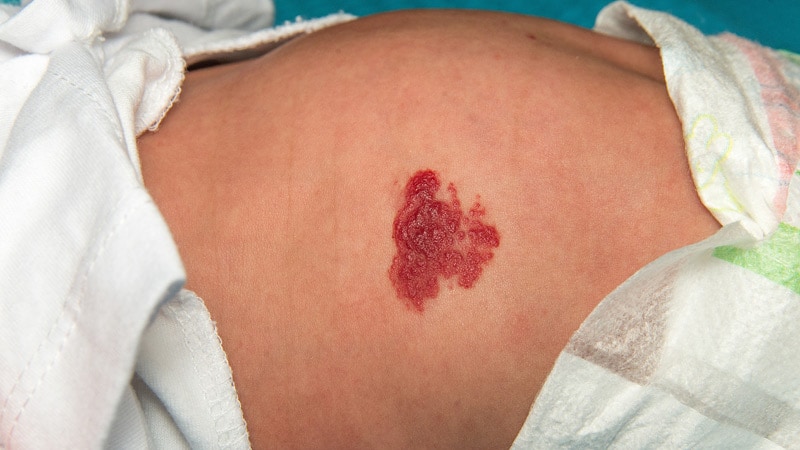 Pediatric dermatologists who treat infantile hemangioma (IH) can consider nadolol as a noninferior — and possibly a better — alternative to the standard treatment propranolol, according to a study published in JAMA Pediatrics.

“In our experience, nadolol is preferable to propranolol given its observed efficacy and similar safety profile…[and] its more predictable metabolism that does not involve the liver,” lead author Elena Pope, MD, told Medscape Medical News. “In addition, the fact that nadolol is less lipophilic than propranolol makes it less likely to cross the blood–brain barrier and potentially affect the central nervous system,” added Pope, who is head of the division of pediatric dermatology at the Hospital for Sick Children and professor of pediatric medicine at the University of Toronto, Ontario, Canada.

The prospective double-blind, randomized noninferiority study was conducted between 2016 and 2020 at two tertiary academic pediatric dermatology clinics in Ontario, Canada. It included 71 infants with a corrected gestational age of 1 to 6 months whose hemangiomas were greater than 1.5 cm on the face or 3 cm or greater on another body part and had the potential to cause functional impairment or cosmetic disfigurement.

Patients were randomized to either nadolol (oral suspension, 10 mg/mL) or propranolol (oral suspension, 5 mg/mL) beginning at a dose of 0.5 mg/kg/day twice a day and titrated weekly by 0.5 mg/kg/day until the maximum dose of 2 mg/kg/day. The dose was then adjusted until week 24, based on patient weight and clinical response, after which parents could choose to continue the infant on the assigned medication or switch to the other one. Follow-up visits occurred every 2 months after that until week 52.

For the main study outcome, measured by visual analog scale (VAS) scores at week 24, the between-group differences of IH size and color from baseline were 8.8 and 17.1, respectively, in favor of the nadolol group, the researchers report, with similar results seen at week 52. Safety data were similar for both treatments, “demonstrating that nadolol was noninferior to propranolol,” they write.

“A considerable portion of patients experienced at least one mild adverse event (77.1% vs 94.4% at 0 to 24 weeks and 84.2% vs 74.2% at 24 to 52 weeks in the nadolol group vs the propranolol group, respectively), with a median of two in each intervention group,” they noted, adding that while these numbers are high, they are similar to those in previous clinical trials.

“The efficacy data coupled with a more predictable pharmacokinetic profile and lower chance of crossing the blood–brain barrier may make nadolol a favorable alternative intervention in patients with IHs,” the authors conclude. However, they add that “further studies are needed to prove superiority over propranolol.”

Asked to comment on the results, Ilona Frieden, MD, co-author of the American Academy of Pediatrics Clinical Practice Guideline for the Management of Infantile Hemangiomas, said that while this is a “very interesting study and deserves further consideration,” the findings do not reach the level at which they would change guidelines. “The vast majority of patients being treated with a systemic medication for IH are in fact getting propranolol,” said Frieden, director of the Birthmarks & Vascular Anomalies Center at the University of California, San Francisco. “Though this study — designed as a noninferiority study — does seem to show slightly better outcomes from nadolol versus propranolol…it is a relatively small study,” she told Medscape Medical News. “Infantile hemangiomas are a very heterogeneous group, and larger studies and longer-term outcome data would be needed to truly compare the two modalities of treatment.”

Concern over the safety of nadolol was raised in a case report published in Pediatrics in 2020, which described the death of a 10-week-old girl 7 weeks after starting nadolol for IH. The infant was found to have an elevated postmortem cardiac blood nadolol level of 0.94 mg/L. “Although we debated the conclusion of that report in terms of death attribution to nadolol, one practical pearl is to instruct the parents to discontinue nadolol if the baby has no bowel movements for more than 3 days,” Pope advised.

The author of that case report, Eric McGillis, MD, program director of clinical pharmacology and toxicology and an emergency physician at Alberta Health Services, in Calgary, Alberta, Canada, said the conclusion of his report has been taken out of context. “We acknowledge that our case report, like any case report, cannot prove causation,” he told Medscape Medical News. “We hypothesized that nadolol may have contributed to the death of the infant based on the limited pharmacokinetic data currently available for nadolol in infants. Nadolol is largely eliminated in the feces and infants may have infrequent stooling based on diet and other factors, therefore nadolol may accumulate,” he noted.

The infant in the case report did not have a bowel movement for 10 days “and had an elevated post-mortem cardiac nadolol concentration in the absence of another obvious cause of death. More pharmacokinetic studies on nadolol in this population are needed to substantiate our hypothesis. However, in the meantime, we agree that having parents monitor stool output for dose adjustments makes practical sense and can potentially reduce harm.”

Kate Johnson is a Montreal-based freelance medical journalist who has been writing for more than 30 years about all areas of medicine.