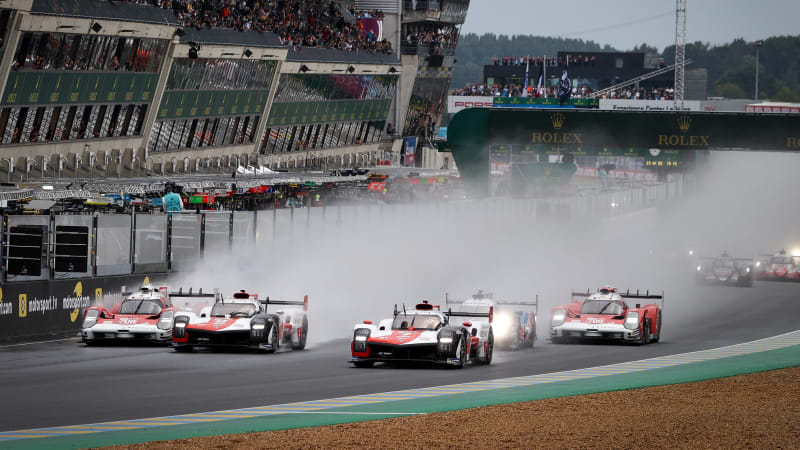 Automakers and energy giants are rethinking the environmental impact of motorsports, so much so that next year’s edition of the world’s oldest endurance race will be won in a car powered by wine dregs.

Oil major TotalEnergies SE said Aug. 20 that it’s developing its own 100% renewable fuel for motorsport which will be introduced from next year, including at the 24 Hours of Le Mans race in France, where the car that covers the greatest distance in a full day wins.

The so-called advanced ethanol fuel is made in part with residues from the French wine industry, such as wine lees and grape pomace. Pierre Fillon, president of Automobile Club de l’Ouest, which organizes the race, said that the event is well suited to test out biofuel.

The fuel should allow an immediate reduction of at least 65% of the racing cars’ carbon emissions. It works by blending wine residues with with an ethanol byproduct, helping the engine burn fuel more efficiently and reducing air pollution. For TotalEnergies, it’s an opportunity to test fuels that will help with a wider push to reach net zero carbon emissions by 2050.

“The racing track is more than ever an open-air laboratory for TotalEnergies,” said Chief Executive Officer Patrick Pouyanne.

Other high-profile race organizers will be taking note, mindful of the pressures the industry at large is facing to decarbonize. Electric is in the conversation too. Porsche AG plans to invest more than $7 billion in electric mobility by 2022, and half of its new vehicles could have an electric drive system by 2025.

Formula One, the highest class of international motor racing, uses fuel that is equivalent to ordinary gasoline available to the public. It requires engines to use fuel that has 10% sustainable content, and the sport’s governing body, the FIA, has committed to net-zero carbon by 2030.

IndyCar, the premier level of open-wheel racing in the U.S., sees drivers bolt around the course in a blend of 85% ethanol and 15% high-octane racing fuel.

But race fans have doubts. Josh Jeremiah, an avid motorsport enthusiast, has felt uneasy about his environmental concerns colliding with his love of the sport. While slashing emissions throughout the F1 season is essential, he said the industry must balance that against lowering the quality of motor racing.

“I worry about whether cars will perform as well unless the tech is there to make renewables powerful enough,” he said. “And it doesn’t eliminate the issue of how bad traveling to the tracks is for the environment.”

In 2018, F1 calculated its total carbon emissions at more than 250,000 tons, 45% of which came from moving freight around the world by road, air and sea. Only 0.7% came from the emissions of the racing cars themselves.

On July 31, Dutch racing star Larry ten Voorde sped to victory in the fourth heat of the 2021 Porsche Supercup. He crossed the Budapest finish line in a car powered by a blend of liquid biofuels.

The German car giant has teamed with Exxon Mobil to create lower-carbon fuels for future consumer use. Exxon analysis shows there is a huge potential to lower greenhouse gas emissions with the fuels, which will power Porsche’s vehicles throughout the Supercup’s eight heats.

The competition’s project manager, Oliver Schwab, was a former manager at Porsche China and had been at the helm of previous tournaments organized by the carmaker. The trial has been running smoothly, garnerning positive feedback from teams, he said.

Porsche and Exxon aim to produce synthetic fuels made from hydrogen and captured carbon dioxide by next year, which is expected to cut greenhouse gas emissions by up to 85% compared to current market standards. The eFuel will be sourced from the Haru Oni plant in Chile, where hydrogen is generated in the strong winds of the nation’s southernmost region.

The companies will produce around 35,000 gallons of eFuels during the pilot phase in 2022, including for next year’s Supercup. The efforts will support Porsche’s ambitions to reach carbon neutrality by 2030 and invest about $1.2 billion in sustainable mobility, but the company does not view its eFuel push as a possible replacement of electric-powered cars, according to Holger Eckhardt, its motorsports spokesman.

Nonetheless, with engines running reliably in the Supercup, and the eagerness among competitors to pioneer renewable energy, Holger expects more and more racing competitions to use it in the coming years.

“The FIA World Endurance Championship and Automobile Club de l’Ouest, will be next,” Eckhardt said, referring to endurance races such as 24 Hours of Le Mans. “The World Rally Championship and Formula One will then follow.”