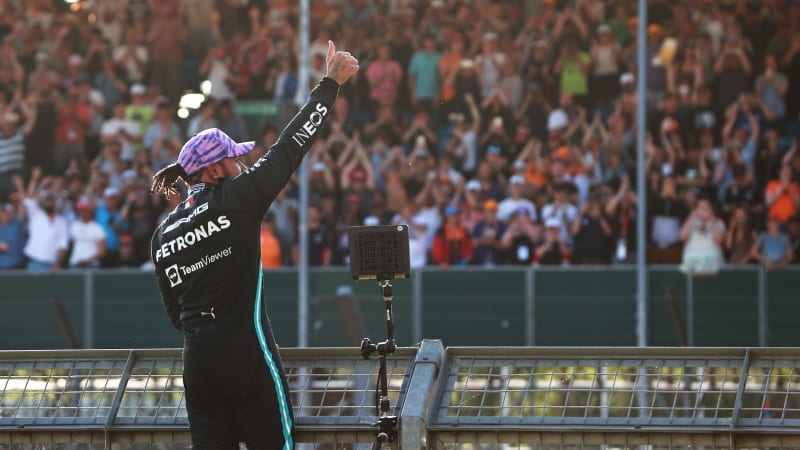 The winner of Saturday’s 17-lap dash around the Silverstone circuit will take the official pole position for Sunday’s main event in front of a sellout crowd expected to number more than 140,000.

Hamilton, who can count on the support of the massed ranks who rose to salute the Mercedes driver as he went top, will be joined on the front row by Red Bull’s championship leader Max Verstappen.

Verstappen leads Hamilton by 32 points after nine rounds, but the Briton has won his home race a record seven times and will do all he can to give his army of fans another day of celebration.

“I need to bring out the lion tomorrow and give it everything,” said the 36-year-old Briton, whose once-dominant team have been beaten in the past five races. “I think I’ve got the car where I need it, so we’ll see.

“We’ve been missing this for a whole year,” Hamilton said of the atmosphere. “To have a full crowd like this, to see the energy … this is down to the fans, I think.

“I could see the crowd, and it was really reminiscent of my first pole here in 2007.”

Verstappen had been quickest by a massive seven tenths of a second in the day’s only practice session, causing some consternation at Mercedes.

The Dutch 23-year-old said the car was “understeering to the moon” in the qualifying session, however.

“I couldn’t really attack any corners, I was just waiting for the front to grip up,” he said. “Bit of a weird feeling, to be honest, to drive.

“We were still quite close, so it’s alright.”.

Hamilton’s teammate, Valtteri Bottas, who helped punch a hole in the air to give the Briton a slipstream, qualified third with Ferrari’s Charles Leclerc fourth.

“There’s all to play for,” said the Finn. “Hopefully we have a good race pace.”

The new format is being trialled at Silverstone and two other circuits that have yet to be decided to provide more excitement over the three days.

If deemed a success, it will be expanded to more rounds next season.

So what is the F1 Sprint, exactly?

The biggest sporting crowd in Britain since the start of the COVID-19 pandemic will see Formula One history made with the debut on Saturday of the Sprint — a qualifying race without pitstops.

Slverstone, where the championship started in 1950, is the first of three tracks that will trial a 100km half-hour long dash to decide pole position and set the grid for the next day’s main event.

“Even if … the Sprint is only the precursor to the main event, I think the drivers will be desperate to beat each other and show who’s the fastest and who’s the strongest,” commented Formula One’s managing director Ross Brawn.

The three-part qualifying session for The Sprint on Friday replaced the usual second practice, meaning teams only have one hour on track to set up their cars before the competitive action.

A mistake on Friday is likely to carry far bigger consequences now, while fans — absent last year due to COVID-19 restrictions — can look forward to meaningful action on all three days.

Points will be on offer for the top three on Saturday, meaning a driver who wins both races and sets the fastest lap on Sunday can bank a maximum 29.

“I’m hoping of course to come out of that race with 29 points,” said Red Bull’s Verstappen, now 32 points clear of Hamilton after winning five of nine races including the last three.