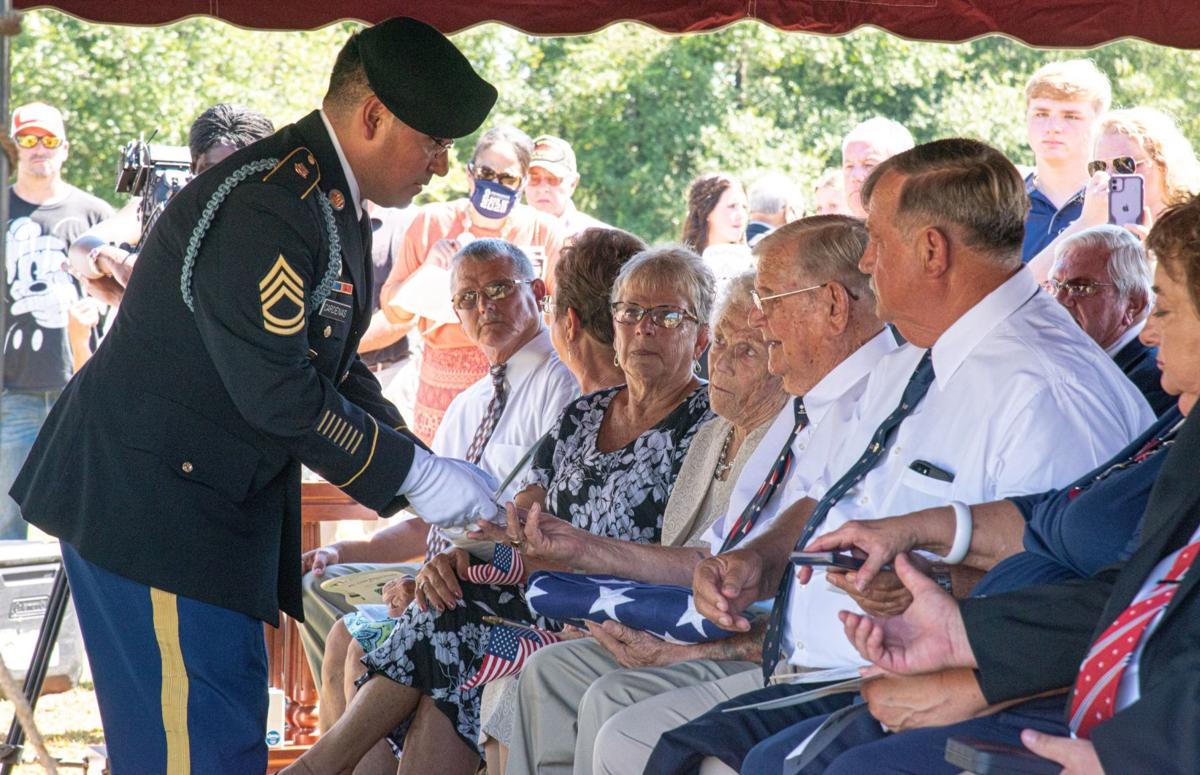 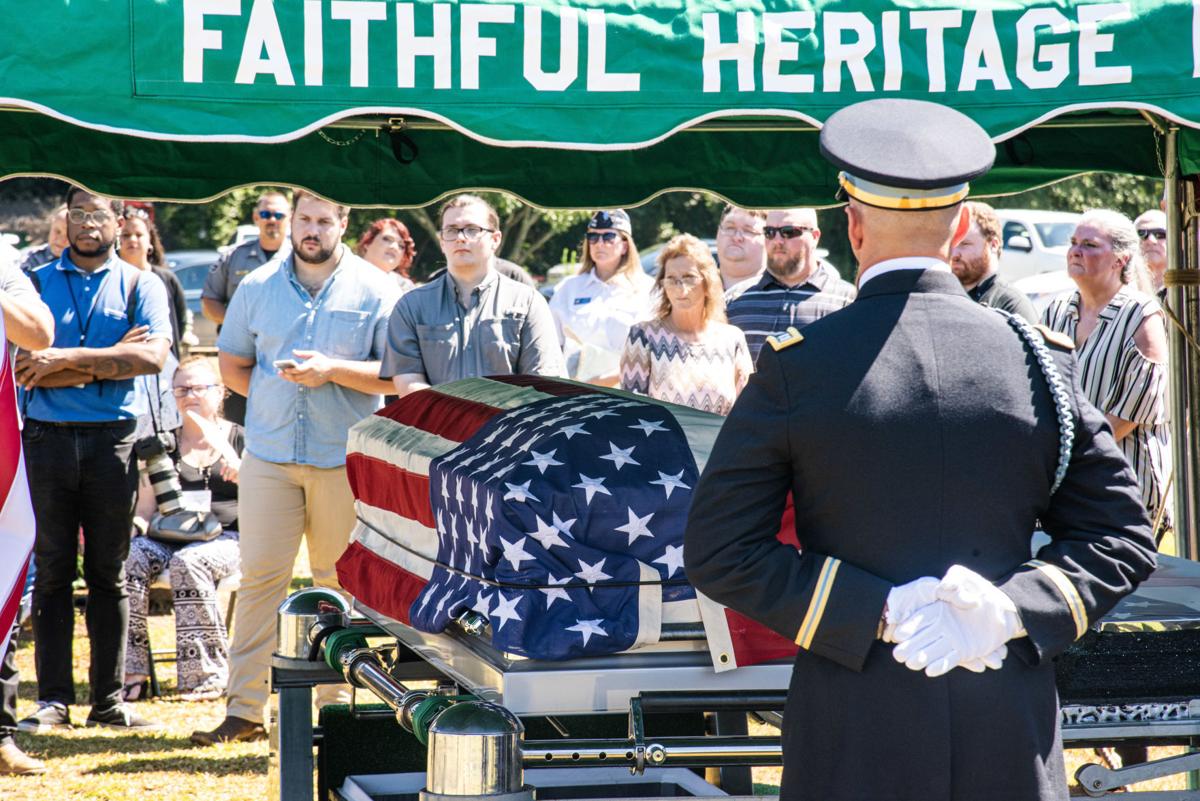 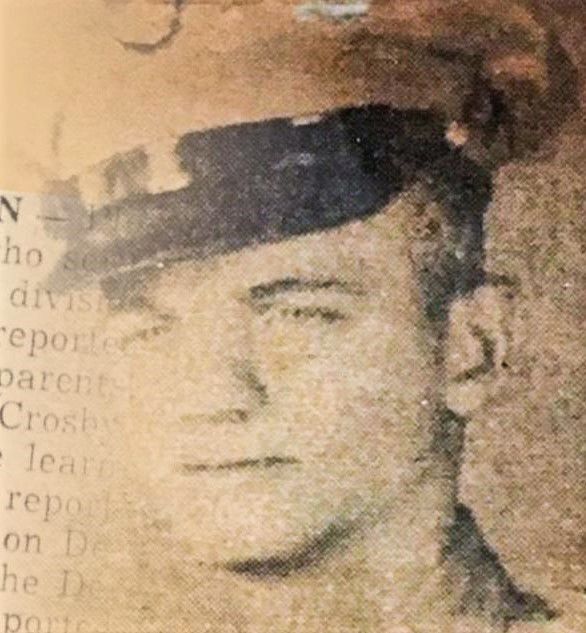 “God is faithful and he never forgets his own.”

Those were among the comforting words the Rev. Brian Self, pastor of Ebenezer Baptist Church in Cordova, shared with the family of a Korean War veteran whose remains were returned to Orangeburg after more than 70 years.

The graveside service for Army Private First Class Louis N. Crosby was held Wednesday morning at Crestlawn Cemetery among a throng of state officials and members of the local community who gathered to support Crosby’s long-awaited homecoming.

“This service got a little bit bigger and received more attention than what the Crosby family first anticipated, but it is well deserved and everyone who made the day possible is very much appreciated,” Self said.

The 18-year-old Crosby was reported missing in action on Dec. 1, 1950, after his unit was attacked by enemy forces near the Chosin Reservoir, North Korea. Following the battle, his remains could not be recovered.

On July 27, 2018, North Korea turned over to the U.S. more than 55 boxes that had been purported to contain the remains of American service members killed during the Korean War. Louis Crosby’s remains were accounted for on April 21, 2020, with an announcement made in July.

Crosby’s remains were received by a U.S. Army Honor Guard at Charlotte Douglas International Airport on Aug. 14. A processional to Orangeburg followed.

Self said Crosby’s dedicated service to his country was the epitome of not only faithfulness, but loyalty and devotion.

“I believe all of those words apply to what we are witnessing today,” Self said. Other members of Crosby’s family also served in the military before his mother signed for the then 17-year-old to enlist in the U.S. Army.

Self also spoke of the faithfulness of Crosby’s family in keeping his memory alive, and God in helping to make it all a reality.

Crosby’s 92-year-old brother, Henry M. Crosby Sr., was joined by other family members who gathered to lay his youngest brother to rest next to his parents on what would have been his 89th birthday.

Self said their prayers for Crosby’s eventual return home were answered.

Your membership makes our reporting possible.

“I see the sovereignty of God in that. God’s hand was there,” Self said.

Orangeburg resident Mac Crosby, Henry’s son, said the family was excited about having his uncle brought back home and hoped that other families would also find closure in having their loved ones’ remains identified.

“Thompson Funeral Home and Ft. Jackson … have all been so great. They’ve done a great job. We had a good trip to Charlotte to get him back home. The riders that gave us the escort out, we thank them very much, too,” Crosby said.

He continued, “It was just an emotional trip overall. Everybody at the airport, they all took very good care of us. We were real impressed with everybody. The emotions are still running strong. Getting him home buried next to his mom now, we’re thankful for all that.”

The graveside service included singing, an airplane flyover and a presentation of the Korean War veteran’s awards and medals.

Crosby said his father has been overwhelmed with everything.

“Everything’s just been going so good for him,” he said.

William F. Grimsley, secretary of the S.C. Department of Veterans’ Affairs, read a letter from Gov. Henry McMaster to the 92-year-old.

“This is the third of three sets of remains from this same rifle company from this same unit in Korea from South Carolina that we had the honor to reinter in the past couple of months. This is a tremendous opportunity to bring our soldiers home and to recognize them appropriately,” Grimsley said.

Johnny Abraham, an Orangeburg resident and U.S. Army veteran, said he attended Wednesday’s memorial service as a representative of the S.C. Veteran’s Group of North.

“I believe we’ve only got one fella that’s in our group that was from the Korean War. So I figure since we’ve got one fella, I figure I might represent because this is the war that we kind of forgot,” Abraham said. He served as a specialist in the Air Defense Artillery Branch in Vietnam from 1966 to 1969.

Dwight M. Hora, state commander of the Veterans of Foreign Wars, Department of South Carolina, said he and other VFW members from across the state were happy to support the Crosby family.

“We’re a veteran service organization, and we need to continue to support, but we’re also showing our love for our fellow brothers and sisters because when they come home, it’s very important we continue to recognize that and support it,” Hora said.

He continued, “We work closely with the Defense POW/MIA Accounting Agency and we ensure that we will never forget. We continue to support that agency by joining forces with them to continue to bring men and women who have been MIAs or POWs home.”